How long has it been since you — or anybody you know, for that matter — used a Rolodex for anything other than to keep loose papers from sliding off the desk? And yet “Rolodex” continues to be one of the most widely used terms among development officers and fundraising consultants — not to mention one of the most anxiety-inducing words in the English language for nonprofit board members and major donors. How could it be that mere mention of a once-critical but today ignored office product — as in, “Can I count on you to open your Rolodex?”— can create both optimism and terror in the hearts of development professionals?

I kid, but most everybody reading this knows exactly what I mean. To the development professional, an organization’s most powerful fundraising asset is its pool of “true believers” — committed friends, board members, donors, and funding partners who are already convinced that the nonprofit’s mission, programs, and effectiveness are worthy of generous support. In a game where getting through the door is 90 percent of the challenge, common sense tells us that an introductory call from a friend will almost always be more effective than a cold call. Think of it this way: how many basketball players will launch a half-court shot when the defense has left the lane wide open for a layup? (Not you, Warriors fans.)

At the same time, many of us understand that our true believers aren’t always eager to share the good word about an organization with others or are willing to go out of their way to extend an invitation to their friends and business associates to support — with their time, money, or both — a cause close to someone else’s heart.

Why is it that true believers are so often reluctant to share philanthropic good news with their friends and associates? And what can we, as development professionals, do to reduce their level of anxiety and nudge our board members and donors into opening their Rolodexes a little more readily?

With your indulgence, let me introduce you to a theory I call the Three Big Fears of Major Donors and Board Members — a theory that, in my opinion, goes a long way toward explaining what I call Reluctant Rolodex Syndrome.

Fear #1: The Fear of Being Asked to Solicit Money

It never ceases to amaze me how many people who routinely pitch multi-million-dollar investments to acquaintances or friends break out in a cold sweat when they’re asked to solicit those same acquaintances and friends for a $25,000 gift in support of remodeling a local homeless shelter, providing job training to displaced workers, or some other equally worthwhile cause. Shouldn”t it be the other way around? Shouldn’t it be easier — much easier — to ask someone for an investment that benefits others in need than to ask them for an investment from which you and your partners personally hope to profit? Go figure.It’s a paradox, a quirk of human psychology, and I’ve given up trying to understand it. Instead, I’ve developed a simple solution to the problem that almost always works: I reassure true believers that I’m not asking them to make the actual ask — I’ll take care of that, thank you very much — but instead simply need them to broker an introduction to their deep-pocketed friends and acquaintances that helps me get through the door. For many true believers, that’s all the reassurance they need; for others, it’s not sufficient to break through their resistance. In which case…

Fear #2: The Fear of Asking Rather Than Giving

In his best-seller Give and Take: Why Helping Others Drives Our Success, Wharton Business School phenom Adam Grant maps out the distinction between “givers” and “takers” in the workplace, and argues that giving typically is productive, except when carried to an extreme. “One of the critical distinctions between self-sacrificing givers and successful ones,” Grant observes, “is the willingness to seek help from others.” (By the way, I encourage you to check out one of Grant’s TedTalks.)

Although I can’t prove it, I assume that the nonprofit true believer tends to be more of a “giver” than a “taker.” (Isn’t that true, after all, of most people who are active philanthropists?) Helping our self-sacrificing giver understand that the ask is not for themselves but rather to benefit others in need can be an effective tool, in Grant’s way of thinking, for cultivating givers who are willing to seek help from others — in this case, by asking them to crack open their Rolodexes. For the uber-idealist, asking another person for something can be understood as giving the other a gift — the opportunity to help someone in need. And yes, that argument sometimes has been met with a good-natured “Nice try.” Moving on…

Saving the most problematic for last, it’s been my observation that fear of the quid pro quo — namely, the price the true believer expects he/she will ultimately have to pay in exchange for soliciting the support of others — is a powerful contributor to the Reluctant Rolodex Syndrome.

There is no antidote to the quid pro quo virus. It is, after all, not unrealistic to expect B to ask A for a future gift to his/her favorite charity when A has successfully leaned on their relationship to solicit B for his/her own cause. But here, too, there is a solution: keep your true believer out of the ask, unless, and only if, he/she is prepared to take that risk. There’s no question that the most productive solicitation typically occurs when the true believer has leverage over the prospect, but we all need to understand that there is a cost to that approach. If the cost is too high for some, the next best thing is a warm introduction and handoff.

So, to all my philanthropist friends out there, understand that your support is likely to have the most impact when it involves both the opening of your checkbook and the opening of your Rolodex. And for those doing the double ask, don’t forget to be sensitive to the complexity of what you are asking: for many people, the latter is more stressful than the former.

Ami Nahshon offers a portfolio of coaching and consulting services designed to help nonprofits optimize their philanthropic mission, strategy, and performance. In his last post, he wrote about the strategic thinker-leader. For more information, contact him at AmiNahshon@gmail.com.

For a substantial number of wealthy Americans, establishing charitable foundations and family funds has become an attractive and tax-effective way of channeling 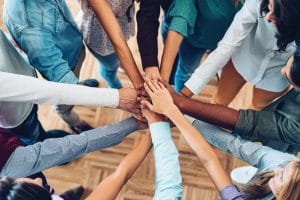